My Heart is a Chainsaw - Stephen Graham Jones 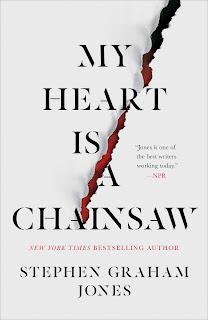 This story follows Jade, a seventeen year old girl with an abusive mother, absent father, and love of slasher movies.  She's the town outcast and feels like since the entire town wants nothing to do with her, she'll just escape into her own world where the rules of slasher horror are set in stone.  Now that the new housing development across the lake is ready for people to start moving in, the gentrification of the small town of Proofrock seems to kick off a series of deaths that look unrelated to all except Jade.  Where the local sheriff sees a boating accident and bear attacks, Jade sees a masked killer in search of revenge.  It will take all Jade's knowledge of slasher history, rules, tropes, and a reluctant Final Girl for anyone to get out of this alive.

This feels a bit weird to say about a book that is this bloody and intense, but this was a really fun read.  I read it over the course of a few days and every time I picked the book back up, I was instantly drawn back into the story.  Everything from the writing style, structure choices, character arcs, and atmosphere really came together perfectly for a really fun, summery, horror read.  There are some really heavy moments, it isn't all fun, but those moments fit in so wonderfully with the rest of the story that they didn't take me out of the story at all.  I think Jones really captured the feeling of those summer time blockbuster slasher movies in this story and I wanted to start reading the book again immediately after I'd finished it.

The story revolves pretty heavily around Jade's knowledge of slasher movies and I was a little nervous going into this book that I would be a little lost.  I really enjoy the plots of horror movies but I'm a complete wimp when it comes to actually watching them (I blame my overactive imagination).  I was forced to watch some horror movies during sleepovers in high school but they aren't my go-to movies to watch.  For example, I know the general plot of the Friday the 13th movies but I've never actually watched them.  I was worried that this lack of first hand experience would mean I would miss out on aspects of the story that I was supposed to pick up on.  However, I found that my general pop-culture level knowledge of slasher movies was completely sufficient to understand Jade and her planning throughout the story.  I think readers with zero knowledge of slasher films could absolutely still follow along in the story because Jade explains the tropes and expectations of slasher films really well to the reader through a few different plot devices. I didn't know a whole lot about the different plot beats of slasher movies so I learned about that aspect through reading this book and I didn't have a hard time understanding Jade's logic or thought process.

The way Jones is able to build in these 'teaching' moments for Jade to explain stuff to the reader was really well done.  We know that Jade needs to finish a history class before she can graduate high school and throughout the book, we get these extra credit papers that Jade is writing for her history teacher that revolve around different slasher movie tropes or plot beats and how they relate to local legends or historical events.  Jade needs to explain these ideas because it is an academic paper, but it is still 100% focused on slasher lore and we get a little more background information about the town with each of these papers. These short breaks also give the reader a bit of breathing room from the main plot pacing which I always appreciate.  These papers also become important to the main plot of the book as it progresses which I thought was a nice touch to make them feel even more grounded in this world.

The pacing of the story was just about perfect.  It did start out a little slow for me in the first 1/3 where we were just following Jade around and getting a feel for her personality quirks.  We get a death or two in this time, but it doesn't really feel like anything has really started yet.  The pacing does then ramp up pretty evenly during the middle 1/3 and the last 1/3 is full speed ahead (the big climax scene at the end was phenomenal).  The last 1/3 really felt more like a straight-up thriller but then the horror elements came in really strong at the last 10%.  I do wish we would have started ramping up the pacing and main tension a little sooner but that is just me being a little picky.  I did think Jones did a fantastic job at answering questions the reader probably had at just the right moment.  There were a number of times where I was reading along and thought to myself "why can't they just do X" and then a few pages later, someone in the book would pose that question and it would get answered. This happened with bigger details as well as small details where I found myself thinking "that was an oddly-specific detail to add in there, I wonder if it will be important later" and then 50 pages later, it was important.  I just really love when my brainwaves and the story get in sync like this and it really ups the immersion factor for me.

The character work in this book was top-notch, especially Jade. As a former teenage girl myself, I loved how Jones was able to capture the feeling of being 17 where you're worried about things like passing history and bigger things like what to do after graduation.  Jade's internal monologue is pretty constant and jumps around as her thoughts wander.  She does the same thing with the conversations she has with people she actually likes.  I can remember my thoughts going a mile a minute like that (and they still do at times) and I thought that feeling came across really well in the writing. It was an interesting mix of sort of stream of consciousness with a heavy literary fiction style which I did find myself having to make an effort to slow down my reading at times because my eyes were skimming over the page.  Because we're so deep into Jade's mind and her POV in the story, I didn't find myself questioning her character motivations but there's a point at about the 50% mark where other characters are pointing out things about Jade that she seems to be pretty cagey about answering their questions.  Which then had me reading the last half of the book while questioning if Jade was an unreliable narrator or if she was giving us a truthful representation of the events happening around her.  It was a really nice way to subtly up the tension in the reader, especially as the events became increasingly dangerous and strange.

Overall, this has been my favorite horror book so far this year.  I absolutely loved the premise, pacing, characters, and integration of the slasher movie lore into the story.  I think the prose style leans a little heavy into the lit-fic side of the spectrum which isn't for everyone but I was so engaged in the plot arc and Jade's character that I just wanted to keep reading.

Thanks to NetGalley and Gallery Books for the ARC in exchange for review.

Email ThisBlogThis!Share to TwitterShare to FacebookShare to Pinterest
Labels: netgalley